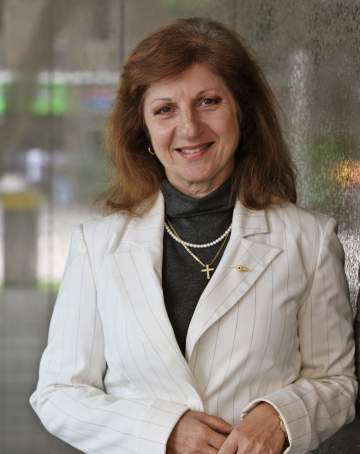 Dr. Maria Skyllas-Kazacos is known worldwide as the researcher and pioneer credited with the invention of the vanadium redox battery (the ‘VRB’). Her pioneering work saw her rolling up her sleeves to personally take charge of tasks such as producing electrolytes, novel plastic electrodes, and new modified membranes, as well as developing mathematical models and designs for battery technology and components, through to prototype testing and manufacturing trials in conjunction with industrial licenses.

The VRB is now regarded as one of the most feasible technologies currently available to meet the growing need for efficient renewable energy storage to help in the global reduction of fossil fuel consumption and greenhouse gas emissions. From early on in her research career, she had a particular concern with the environment: ‘I really wanted to do something that I could see as important for the environment and for society. As a physical scientist, I suppose the most important social contribution you can make is to the environment – particularly from my own area of expertise as distinct from the medical or other social areas.’

Mr. Terry Perles has more than 30 years of experience in the metals industry in roles that include engineering, construction management, sales, marketing and senior management. After joining US Steel Corp. in 1980 serving assignments at the company’s steel mills in Homestead and Clairton, PA., he joined vanadium producer Stratcor in 1988. During his 20 year tenure with Stratcor, he held positions in sales, marketing and senior management. By 2008, the Evraz Group had acquired controlling interest in Stratcor and Mr. Perles joined the Evraz trading division, East Metals S.A. of Lugano, Switzerland. He directed sales and marketing for the corporation’s global vanadium business. Mr. Perles holds a Bachelor of Science degree in mechanical engineering from the University of Virginia and an MBA from the University of Pittsburgh. He served as a member of the International Titanium Association board of directors from 2005 to 2009. He has been a member of the Vanadium International Technical Committee (VANITEC) since 2004.

Mr. Bouchard is the leading strategic project developer and advisor for VanadiumCorp’s “VRB” TSX-V Quebec operations in Quebec Canada.  He has operated for over 25 years in the structural steel industry as well as the the mining and industrial sectors. Before his new role with VRB, Mr. Bouchard was previously with Beauce Atlas, located in Sainte-Marie de Beauce, Quebec, which specializes in the fabrication and installation of structural steel in the commercial, industrial and institutional sectors.  Mr. Bouchard has significant provincial and federal government contacts, as well as various financial institutions, pension funds, and para-governmental organizations. Mr. Bouchard’s interest in vanadium and vanadium batteries stems back to 1997 when he first became a strategic investor in the Lac Dore Vanadium Project that the Company now owns 100%.

Mr. MacLeod is President, J.A. MacLeod Exploration and EnviroCree Ltd. is highly regarded throughout Canada as a mining exploration technologist. He is a pioneer in mineral exploration and environmental impact and early in his career recognized the link and crucial managment philosophy between mining and environment. Founder of the Mistissini Geological Resources Centre, Jim works closely with Aboriginal communities as a consultant on projects and training in mining exploration. Jim is key advisor to VanadiumCorp facilitating local relations and collaboration for project development. He also serves on the Board of Directors of Cree Mineral Exploration Board, and Canadian Aboriginal Minerals Association.

Mr. Sorbara has 26 years experience in mining, management and project development. He received the designation of Professional Geologist in 1991 from the Association of Professional Engineers and Geoscientists in British Columbia and in 1985, the Geological Association of Canada awarded him the designation of Fellow of the Geological Association of Canada. Currently a director of Golden Goliath Resources Ltd. He is a graduate of the University of Toronto where he received a Bachelor of Science Degree in 1976 and a Master of Science Degree in 1979.

Mr. Maclean plays a significant role in the resource sector and has raised more than $100M in equity for mining companies in the last ten years. As a economist by trade (BA Acadia 1971, MA University of New Brunswick 1980), Peter has been a director of 6 junior resource companies. He is currently a director of Movarie Capital, a Capital Pool Company listed on the TSE Venture exchange. Mr. Maclean’s current role with VanadiumCorp is to secure significant financial partnerships for project development.