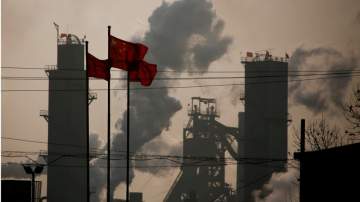 What have the following metals all got in common? Ferro-silicon, vanadium, tungsten and neodymium.

The answer is that all have seen explosive price rises over the last couple of months.

Neodymium, together with its sister rare earth metal, praseodymium, has almost doubled in price since the start of the year.

Vanadium has done the same in the space of two months, while tungsten is up by “only” around 60 percent since the start of July.

These metals, esoteric but critical for a multitude of manufacturing processes, all have one other thing in common.

They are all produced in China and they have all been hit hard by Beijing’s environmental crackdown.

They are just the most extreme examples of a more general supply shock spreading across the entire global industrial metals spectrum from aluminium to zinc.

It was a formal declaration of war on polluters, proving that air quality in China’s big cities had moved to the very top of the political agenda.

It was also the trigger for waves of inspectors to fan out across the country to target entire industrial supply chains.

Inevitably, given both the nature of the production process and the breakneck speed of capacity expansion over the previous decade, the metals sector is one of those singled out for special scrutiny.

“Inspection” sounds a fairly innocuous exercise but in China these environmental checks have proved massively disruptive with metal producers reducing output or closing completely during the inspectors’ visit.

And quite evidently, those that don’t pass the checks don’t get to reopen at all until they take remedial action.

Consider, for example, this update on last month’s inspections on silicon producers in the province of Sichuan from Chinese news provider Shanghai Metal Market (SMM).

Average utilization rates in Sichuan, according to SMM, “fell by more than 10 percentage points month-on-month to 43.40 percent in August, and the year-on-year decline was 20.45 percentage points”.

“In Liangshan, some producers halted operations and production in Ya’an did not recover until late August. Plants in A’ba and Leshan were required to suspend production for unit upgrading to meet environmental production and noise reduction standards”.

Now, imagine the same thing happening to silicon producers across the whole of China and you start to understand the speculative frenzy that has lifted Zhengzhou futures prices.

Next, imagine it happening to every metallic supply chain you can think of and you’ll understand the systemic impact of Keqiang’s blue skies promise.

The inspectors don’t just come once.

Even if a plant passes every single check, they’ll be back next month just to make sure. And they may well return the month after that, just to be doubly sure.

Just how much these inspections impact prices is dependent on each individual metal’s specific dynamics.

Vanadium, for example, was already on something of a roll due to a proposed change to the specifications for Chinese construction steel with implied higher usage of the hardening alloy.

The whole rare earths sector, which China dominates, has been undergoing structural changes as Beijing tries to weed out unofficial operators and push bigger players to consolidate.

Ma Rongzhang, general secretary of the Association of China Rare Earth Industry, was quoted by China Daily as saying that this year’s official rare earths production quota of 105,000 tonnes won’t even cover the 180,000 tonnes of neodymium and praseodymium that the electric motor supply chain requires.

Rare earths, like vanadium, were already showing early signs of embarking on a bull price run.

But the accelerator came at the start of July, when the environmental inspectors started paying their visits.

Whatever the starting point, each metal’s price path since then has been the same vertical climb.

The irony is that most of these critical metals are also in the public eye right now because just about all of them, in one way or another, are going to receive a demand boost from the electric vehicle revolution.

But these “green” materials are nothing of the sort when it comes to their own production processes.

Sectors such as rare earths production have in the past been plagued by smaller, illegal operators with scant regard for environmental or any other sort of regulatory box-ticking.

The problem for everyone else, however, is that Beijing’s clean-up is closing production and ramping up prices.

That should be a warning sign for the rest of the world, which is dependent on China as a major supplier of these metals. Indeed, in a sector such as rare earths, it’s just about the only supplier.

It’s doing so because of its dominant position in the production of many of the weird and wonderful metals on which 21st century manufacturing depends.

Assuming its supply-side reforms play out as intended, it may prove to be a position that becomes ever more dominant. (Editing by Elaine Hardcastle)