Flow batteries have a unique capability; rapid and safe recharge of electric vehicles (EV’s) by electrolyte exchange. This is seen as the most efficient, practical route for bringing renewable energy (RE) to transport; ‘well to wheel’ efficiency is more than four times better than Hydrogen and because the ‘electric fuel’ is recycled continually, operating costs can equal conventional diesel fuelled vehicles. 24 hour vehicle availability can overcome the energy and power limitations of flow batteries.

New proprietary refueling technology described in this paper, will initially be used in the urban environment where zero emission vehicles are essential and later, with improvements in ‘electric fuel’ energy and power density, to the wider 50m global vehicle fleet where the market demand for automotive electric drive systems is now expected to exceed $25Bn by 2020. 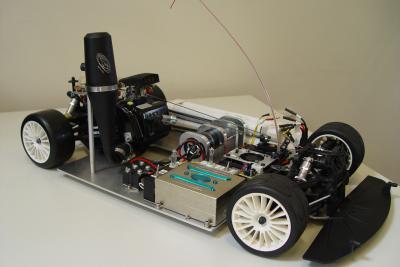 To compete successfully with the flexibility and low cost of established diesel and LPG vehicles, electric city vehicles – taxis, buses and delivery vans need to have a highly flexible operating capability with minimum downtime. Many city vehicles operate 18 hours per day or more and simply cannot be serviced by conventional batteries due to excessive down time required for recharging. There are also severe limitations on the availability of fast charging points in cities due to lack of parking space.

Boost charging of conventional batteries can close the operational range shortfall but costs increase because of shortened battery life, peak time electricity use and unproductive downtime all contributing to higher operating costs per kilometre. Despite this there are many examples of successful city operations – notably the ATAC Rome fleet of 52 electric minibusses and the EA Technology Wavedriver postal vehicles with on-board fast charging.

Note that average city centre bus loop route in the UK is less than 12km. Flow battery powered vehicles can be safely refueled in five or six minutes – replacing two to three hours of operating time and coming close to diesel costs. Note that they will also be recharged electrically at off peak rates.

Flow battery refueling – how it works

A hypothetical feasibility study using currently available VRFB technology has been carried out on the Ecobus design. The Ecobus is a lead acid battery powered minibus which is operating in the Italian cities of Rome, Bologna and Milan and recently by EATechnology in Liverpool UK. Working within the existing battery envelope and based on the RE-fuel system with 30Wh/L electrolyte ED, a city based minibus could cover a distance of 30km between refueling points giving 2 to 3 hours of city centre operation. The refueling process could be carried out in 5-10 minutes fitting into a conventional diesel city bus schedule – the bus could operate for 24 hours a day if required. Other potential applications include Taxis, delivery vans and 24 hour fork lift trucks. In conclusion, although domestic and urban recharging is now being rapidly deployed for small commuter vehicles there is limited availability of sites and lack of operating flexibility for urban transport operations. High EV operating costs mainly driven by battery depreciation are currently being overcome by state subsidies which are not sustainable.

Flow battery systems offer a unique refueling capability which can overcome both the limited autonomy and the high cost of advanced batteries making EV’s cost competitive with diesel fuel for city transport they also offer a smooth interface with zero carbon renewable power and maximum use of off peak baseload grid energy. Increased electrolyte ED and specialized lightweight vehicles will increase range between refueling stops and could open much wider global markets in the future. To make this happen a co-operative effort in the flow battery business is needed now to include partners among the forward thinking city transport authorities.