The Race to Build a Better Battery for Storing Power

The lithium-ion gargantuan is housed in two trailer-truck-size green metal containers. It sits atop a 10-acre former landfill and captures electricity from 7,722 nearby solar panels—enough to power 2,000 homes on a sunny day. What’s revolutionary about this system isn’t the solar farm; it’s the size and purpose of the battery, which offers 3.4 megawatt-hours of storage, enough to supply backup power to about 170 homes for a day, if needed.

The rap on solar and wind is intermittence—they don’t produce power when the sun isn’t shining or the wind isn’t blowing, making them unreliable as the primary source for power grids. But if vast amounts of renewable energy—say, enough to power entire cities—could be captured and stored in giant batteries and deployed when needed, that downside would fade away.

This has been the “missing piece” in the renewable-energy revolution, says Venkat Srinivasan, director of the Energy Department’s Argonne Collaborative Center for Energy Storage Science. But it’s starting to come into view, thanks to the scale and progress of current research and real-world applications such as Green Mountain Power’s.

Green Mountain’s project puts it in the vanguard of power companies that are showing that utility-scale battery storage can be technologically and economically viable—depending on the scale and how it is used.

Like all utilities, Green Mountain faces issues meeting “peak demand,” the high-use period, typically in the early evening, when people return from work and school and crank up air conditioners and energy-hungry appliances.

Many U.S. utilities fire up natural-gas-powered generators to help their baseload plants meet peaks, often imposing hefty surcharges on customers to offset the extra generating costs. Green Mountain instead stores energy from its solar-and-battery combination to meet peaks—shaving as much as $200,000 an hour off demand charges for its 265,000 residential customers, according to the utility. Green Mountain, which says it invested $12.5 million in the project and received a $285,000 government grant, benefits in that it doesn’t have to build additional plants to meet peak demand and gets a public-relations boost among its green-leaning customer base.

Green Mountain’s project puts it in the vanguard of power companies that are showing that utility-scale battery storage can be technologically and economically viable—depending on the scale and how it is used.

Like all utilities, Green Mountain faces issues meeting “peak demand,” the high-use period, typically in the early evening, when people return from work and school and crank up air conditioners and energy-hungry appliances. 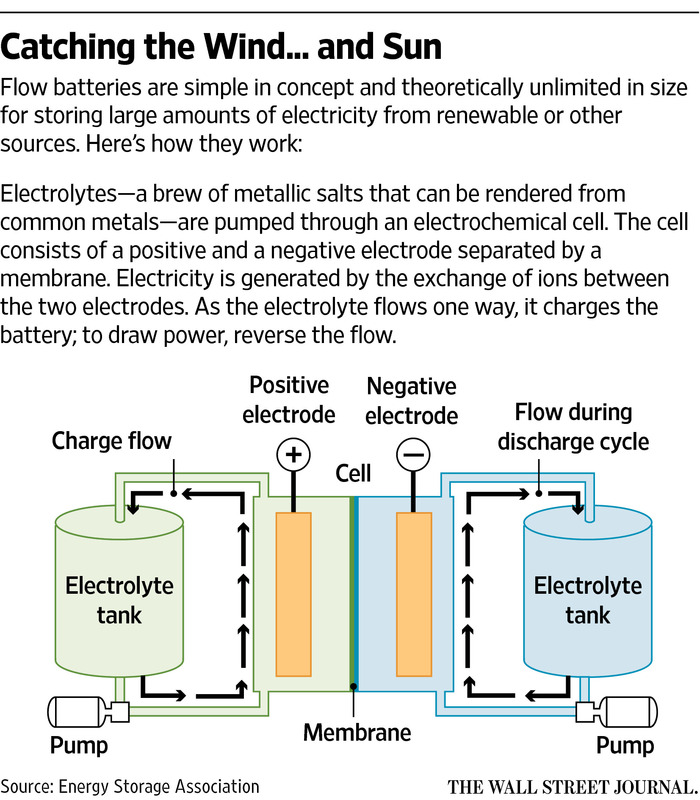 The Stafford Hills facility, which opened in 2015, is one of almost 200 utility-scale systems or utility-scale experimental projects operating in the U.S., according to the Energy Department. Some are providing backup power capabilities to military installations, government agencies and universities that have renewables in their energy mix. Others are being deployed by businesses seeking to go green while paring electricity costs and providing an uninterruptible power supply. Electric-car maker Tesla Inc. has gotten into the act, supplying heavy duty lithium-ion units that come in large white modules or “battery blocks” that can be linked together, depending on the desired capacity.

Still, although lithium-ion batteries are useful for short-term storage and as a fill-in during short-term power outages, they are too expensive per kilowatt-hour to store energy for longer periods. So the push for cheaper technologies continues.

High-profile research centers such as Argonne, Harvard University and the Massachusetts Institute of Technology are engaged in what Mr. Srinivasan says is the equivalent of a “moonshot project” to invent more powerful and cheaper batteries, not only for utility-scale storage, but for electric vehicles, cellphones and laptops, too. Indeed, Argonne’s stated goal is to come up with commercially reproducible batteries that are five times as powerful as today’s batteries, at one-fifth the cost.

The implications of that, energy experts say, are enormous. Utilities, for example, could economically capture and store an entire season’s worth of renewable energy during low-demand periods and discharge it months later when demand is high. In the transportation sector, electric cars could run for 400 to 500 miles on a single charge instead of the 100 or so miles they get today.

“It won’t be tomorrow,” but it isn’t decades away, either, Mr. Srinivasan says.

Little wonder, then, that big-name companies such as Microsoft Corp. are testing the waters. The software and cloud-storage giant is in the midst of a three-year research deal with the Texas Sustainable Energy Research Institute at the University of Texas-San Antonio to determine how utility-scale battery technology might help it better and more cleanly manage the power needs of its 100 or so data centers around the world.

This summer, Microsoft plans to test a number of battery technologies at its $1 billion Boydton, Va., data center. The idea is to “see what chemistries work best” and to determine how best to integrate them into the local electrical grid, says Brian Janous, Microsoft’s director of energy strategy.

What’s alluring, he says, is that renewables anchored by large-scale batteries eventually could give their owners not just the ability to generate some portion of their own power needs, but to produce and save surplus power that can be sold back to the grid. Indeed, a corporate utility-scale battery system might in itself become a “grid asset” if integrated, say, into a utility’s emergency backup power plan to cope with outages, Mr. Janous says.

Go with the flow

While many current projects employ familiar lithium-ion—the battery of cellphones, laptops and electric vehicles—others are testing more esoteric chemistries and technologies. Prominent among these are liquid electrochemical systems known as flow batteries that are constructed in large tanks and have the theoretical advantage of being unlimited in size and capacity. To add battery capacity, you increase the size of the tank or link a series of tanks together.

Flow batteries are made by taking electrolytes—a brew of metallic salts such as those that can be rendered from common metals—and pumping them through an electrochemical cell. The cell consists of a positive and negative electrode, separated by a membrane. Electricity is generated by the exchange of ions between the cathode and anode. The electrolyte flowing one way charges the battery; to discharge it you reverse the flow.

To understand the scale of these things, consider that a flow battery installed in 2014 on an almond farm in Turlock, Calif., is housed in four cylindrical, three-story-high, beige metal tanks. The battery serves the farm’s solar-powered irrigation system.

For long-duration storage, flow batteries are the most likely candidates among all current technologies because they can be easily scaled to gargantuan size, and they have few moving parts and a long working life, says Mr. Srinivasan. What’s holding them back is cost: Most flow batteries use the element vanadium as an electrolyte, but it is very expensive. “We need dirt-cheap materials,” he says.

Both Harvard and MIT are working on materials research, and Argonne is using sophisticated computer technology to invent synthetic compounds that can replace expensive natural ones like vanadium. “We’ve made tremendous progress with batteries in the past four years alone. With batteries it’s all about finding the magic materials,” he says.