By Josephine McSherry for Physics World 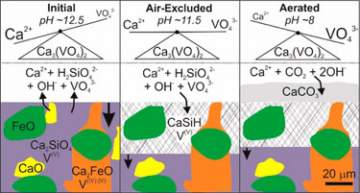 World steel production resulted in between 160 and 240 million metric tonnes of slag in 2016. Now, a UK team has discovered a mechanism for vanadium leaching in basic oxygen furnace (BOF) slag that could make it possible to repurpose more of this byproduct.

The BOF method, used in around two-thirds of steel production, involves blowing oxygen over molten pig iron. Adding limestone or dolomite removes impurities; this step forms slag. Some of the slag can be recycled in a blast furnace or used as aggregate for road surfacing. The rest goes to landfill.

According to Andrew Hobson of the University of Leeds, the findings “will assist in the safe, cost-effective use and/or storage of BOF slag in addition to assessing environmental risks posed by legacy slag heaps”.

Although vanadium can help control diabetes in humans, its toxicity tends to increase with oxidation state. Its highest oxidation state, V(V), which is prevalent in steel slags, may be carcinogenic and harm the immune and nervous systems.

Hobson and colleagues at the University of Leeds, Nottingham Trent University and the University of Hull discovered that vanadium leaching is regulated by the solubility limits of calcium vanadate (Ca3(VO4)2), rather than being redox-controlled as initially thought.

The team identified four phases in the slag. Two – dicalcium silicate and dicalcium aluminoferrite – contained vanadium, whilst the free lime (calcium oxide) and refractory oxide did not.

Hobson and colleagues noticed an altered region depleted in calcium and silicon at the surface of the slag. When isolated from air, the layer formed was thicker, and the aqueous vanadium concentration lower. The team reckons that such a layer has an “armouring effect on slag” by reducing further dissolution.

What’s more, under aerated conditions calcium reacts with carbon dioxide to form calcium carbonate, which provides a sink for aqueous calcium. The inverse relationship imposed by calcium vanadate (Ca3(VO4)2) solubility limits means that when calcium is removed from solution, higher concentrations of vanadium can leach out.

In real-world applications, aerated conditions prevail. Natural rainfall is often used to leach free lime from slag and so maximize potential for reuse. The team suspects that in real slag heaps the high concentrations of vanadium predicted would not be seen because the dicalcium silicate phases containing vanadium become progressively depleted, not to mention that there are kinetic limitations on vanadium release due to the altered region at the surface of the slag.