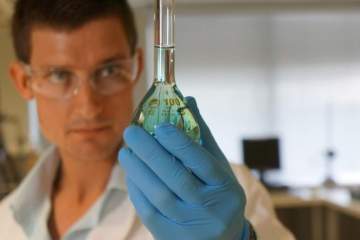 A new use for the metal vanadium — better known for its steel-making qualities — is emerging as energy-savvy consumers continue to look for better ways of storing solar power.

Lucy and Ian Stuart became the first people in Western Australia to install a commercial-sized vanadium battery on their farm in Busselton, south of Perth.

They chose the technology to extend power across their property because it was cheaper in the long run than installing more poles and wires.

“Shocked at just how much it is, very much shocked at that,” Lucy Stuart said.

“Looking at the prices of that, it becomes immediately quite prohibitive, so it warranted a look at other options.”

The science teacher chose not to opt for a common lithium-ion battery because vanadium systems are claimed to have doubled the lifespan.

“It’s a large capital outlay but because we’re hoping for a very long life of this battery, we feel over the years it’s going to repay us,” she said.

“We are now registered as electricity exporters back to the grid. We’re looking forward to that capacity.

“It wasn’t something that swayed our decision but it is a really nice thing to have compared to a monthly electricity bill,” she said.

The vanadium battery is a liquid storage system housed in a tank.

The energy is stored in the electrolyte liquid, and increasing capacity is as simple as adding more fluid to the tank.

It claimed the batteries have a longer life span than lithium-ion versions and store at least four times the energy.

Researchers invented the first all-vanadium redox flow cell at the University of New South Wales in 1985.

The technology has been refined in recent years as demand for energy storage has increased.

Australian Vanadium Limited (AVL) has started importing the batteries for the local market from the Austrian supplier, Gildermeister.

“It is able to run and cycle far more frequently without any damage to that cell over a long time.

“At the end of that life the contents of the vanadium battery can be re-used, that won’t be the case of lithium batteries.”

Aiming to add value to vanadium

The major drawback of vanadium batteries is the expense.

The electrolyte fluid needed to store the energy has to be imported from overseas, but that could be about to change.

AVL chemical engineer Marek Sierakowski is researching the possibility of manufacturing the fluid in Australia.

He is conducting the research out of a laboratory at the University of WA (UWA).

“Vanadium electrolyte makes up 30 percent of the overall capital cost of the battery and a lot of that is due to transport,” he said.

“So if we can produce that in Australia from local vanadium then we really value-adding.”

If his research proved successful, the company would also supply the manufacturing plant with vanadium from its Gabanintha deposit south of Meekatharra.

“Our job is to see if we can do it here or not, we’re quietly confident we’re going to be able to do it here,” he said.

Professor Allan McKinley from UWA’s School of Chemistry and Biochemistry said the university welcomed the opportunity to partner with industry.

“We’re hoping that in the longer term there’ll be opportunities for joint research projects and joint grant applications,” he said.

“Mining and minerals are very important to the economy of Western Australia.

“This is another application, another use of the minerals that can be mined here and the future is renewable energy.”