Vanadium is the latest beneficiary of the battery craze

OPEN a toolbox, pull out a spanner and you may be holding a bit of the answer to global warming: vanadium, a metal named after Vanadis, the Scandinavian goddess of beauty. Used mostly in alloys to strengthen steel, its appearance may not live up to the romance of its name. Yet vanadium could become a vital ingredient in large clean-energy batteries, in which case it will shine a lot brighter.

Its price has already been rising faster than cobalt, copper and nickel, all of which are used in lithium-ion batteries (see chart). The main reason for the run-up is prosaic. About nine-tenths of the world’s vanadium is used to harden steel; China has tightened standards on the strength of rebar to make buildings more earthquake-proof. Mark Smith, boss of Largo Resources, which mines high-purity vanadium in Brazil, says this alone should increase demand for the metal by up to 15,000 tonnes in 2018-19. Last year total production was 83,000 tonnes. 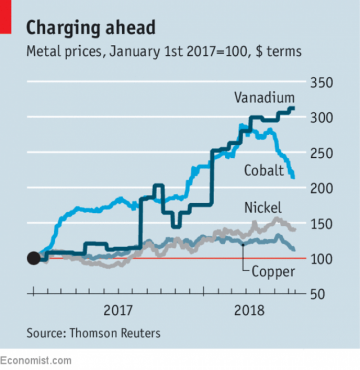 But adding oomph is the incipient demand for vanadium pentoxide, a compound that is used as an electrolyte in vanadium redox flow batteries (VRBs). These batteries are as big as shipping containers and may be better at storing large amounts of wind and solar energy than stacks of lithium-ion batteries. VRBs house the electrolyte in tanks separate from the battery cell and can be charged and discharged almost inexhaustibly over 20 years (indeed, this gives the electrolyte enough residual value that it can be leased). Some analysts reckon that could make them cost-competitive with their lithium equivalents, and safer and more scalable to boot.

They currently use only 1-2% of the global vanadium supply, but the potential growth is producing a halo effect on vanadium prices. “The market just thinks VRBs are sexy,” Mr Smith says. Although the flow batteries are too bulky for use in electric vehicles, they may be ideal for stationary storage. China’s National Development and Reform Commission, a state planner, has called for lots of 100 megawatt (MW) VRBs to be built to help manage the fluctuations of wind and solar energy. A 200MW one billed as the world’s most powerful battery is being built in northeastern China—it is twice the size of a lithium-ion one installed in Australia with much fanfare by Tesla in December.

Some worry that the run-up in vanadium prices will kill VRBs in their infancy. But the metal is abundant; resources total about 63m tonnes. Most of it comes as a by-product from the use of iron in steelmaking, especially in China; some of it is mined in South Africa and Brazil.

The main bottleneck, says Fortune Mojapelo, boss of Bushveld Minerals, a South African vanadium miner, is processing capacity. His firm plans to produce vanadium pentoxide in South Africa to be used in VRBs that Bushveld hopes to erect across Africa. A trend toward vertical integration—from raw material to battery—is also evident in news that VRB Energy, a Beijing-based flow-battery manufacturer, has set up a long-term agreement with a Chinese electrolyte supplier, Pangang Group Vanadium and Titanium Resources, which may also buy a stake in VRB Energy.

If VRBs are as yet little known, that may be because they lack a flashy promoter, such as Tesla’s Elon Musk. But vanadium has at least two backers with considerable clout. One is Glencore, the world’s biggest commodities trader, which mines it in South Africa. The other is Robert Friedland, a canny billionaire who controls VRB Energy. Both are also leading developers of cobalt. They are betting big on the beauty of batteries.

Correction (July 20th, 2018): This article previously stated that VRB Energy was Canadian. To clarify, the company is based in Beijing.

Source: www.economist.com, this article appeared under the Business section of the print edition of “The Economist” magazine under the headline “Beauty and long life”