Why the Economic Survey is wrong about renewables

One of the best examples of muddled thinking that has come to characterize researchers can be found in the latest Economic Survey – pages 119-128 of Volume II – when it discusses the energy scene in India.

There is toil and turmoil in India’s energy markets today.

On the one hand you have researchers who sometimes get muddled up with the costs and the future of renewable energy sources. One of the best examples of such muddled thinking can be found in the latest Economic Survey – pages 119-128 of Volume II – when it discusses the energy scene in India.

On the other is the constant penchant on the part of each state (at times even the central) government to vitiate the investment climate. Some of them have been trying to renege on power purchase agreements (PPAs) which were signed with entrepreneurs who were early investors in this sector, even when the costs were high.

There is a third, and equally serious problem with renewable energy sources, of the entire regulatory machinery working overtime to try and frustrate the onward march of renewables. This is an aspect that shall be dealt with in another article. 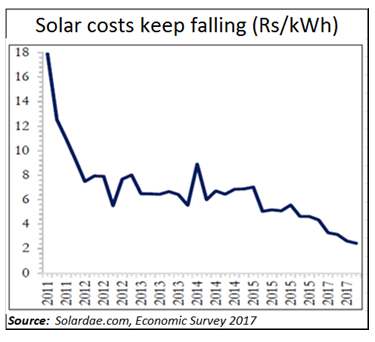 But let’s dwell on the first two issues here. In fact the Economic Survey itself admits to the second problem listed above. It states quite candidly that “as discoms realise that there are cheaper, alternative sources of power than their current PPA rates with generators, there will be a growing rush to seek to renegotiate tariffs downwards.”

Heads I win, tails you lose?

The survey points to the manner in which states like Uttar Pradesh and Rajasthan have announced that they might want to renegotiate some of their existing contracts. “This makes matters more complicated especially in the context of the Supreme Court of India’s recent ruling that contracts are sacrosanct (when considering the pleas of the Adani and the Tata groups that they be allowed to renegotiate their PPAs). Thus, states talk about the sanctity of the PPAs and contracts when the terms benefit them. When the terms hurt the state, it is willing to pass laws retrospectively, and then begin to talk about the need to renegotiate contracts.

This is a very dangerous trend, and unless the Supreme Court firmly puts down such tendencies, India will see its investment climate worsen. Early investors put their money into a project hoping for high returns even when the risks remain equally high. This is what investors did in Germany in 2000, when the cost of solar power was well over the equivalent of Rs 20 a unit. But Germany signed a 20-year contract with them, because that is the price a country pays for inviting entrepreneurs to take risks. That was the vision of Hermann Scheer, the minister for energy in Germany who ushered in the solar power revolution into the world.

His reasoning was simple. He constantly used to tell people that if solar got even 1 percent of the subsidies oil and gas had enjoyed so far, it would become a dominant source of energy. He introduced the Feed In Tariff (FIT) which then became the model for the entire world when it came to promoting renewable energy. Now that the 20-year period is drawing to a close for early investors, Germany will see a tapering off in renewable energy costs. 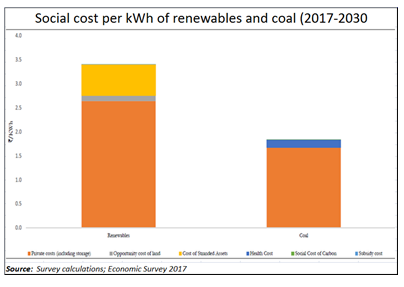 The Economic Survey rightly points out that the costs of solar power are falling (see chart). In fact, because the costs have fallen, many governments are tempted to compel initial investors who signed PPAs with state discoms at the prices prevailing then to lower their tariffs now. They forget that the reason why Germany attracts investments is because it honours state-guaranteed commitments. The Rs 20 tariffs apply to the first investors even today. The cost of solar power will begin to taper off sharply for Germany from 2020 when (progressively) the 20-year terms for the first set of investors reach their expiry date.

Indian legislators have yet to respect the sanctity of contracts. They ignored this principle in the Privy Purses case, and they have tried redrafting and meddling with contracts time and again, often with retrospective effect. This abrogation of contracts should not be allowed to happen again. It pushes up investment costs as the risk element has to be factored in.

While the Economic Survey is on the dot as far as this issue is concerned, it appears to have been misled on other issues.

Take, for instance, the way it has come up with preposterous figures showing the social costs of renewable power to be higher than that of coal-based power (see chart).

The Survey explains the social cost of power in the following manner: “Social cost of carbon refers to the economic cost or loss in the discounted value of economic welfare induced by an additional unit of carbon dioxide emissions (Nordhaus, 2017). The generation of power from coal-based thermal power plants is based on the combustion of coal as fuel and thus generates emissions that contribute to increasing the concentration of greenhouse gases in the atmosphere. Nordhaus (2017) finds that the global social cost of carbon at 2010 prices for the year 2015 was USD 31.2 per tCO2.”

After computing the costs involved, the Survey concludes, “Our estimates of social costs of coal and renewables show that in 2017 the social cost of renewables was around 3 times that of coal at $11 per KWh”. Drill down the costs computed, and you find that the survey has looked at the following costs: (a) private costs of generation; (ii) social cost of carbon; (iii) health costs ; (iv) costs of intermittency; (v) opportunity cost of land; (vi) stranded assets; (vii) cost of government incentives.

The survey suggests that the private costs of generating power can be higher than power from large scale grids. It does not say this explicitly, but that appears to be the implication. If that is the reasoning, the Survey forgets that when it comes to countries like India, the advantages accruing from small scale production by large numbers can be substantially higher than the advantages from mass production. 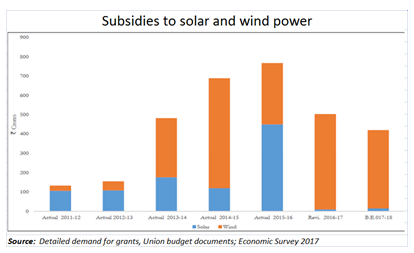 A good example is the Verghese Kurien model of dairy farming in India, making this country the largest producer of milk in the world. It is also the lowest cost producer of milk. But more importantly, he showed the entire world that it is possible to reduce milk collection, processing, marketing, distribution and other related costs to just 20 percent of the market price of milk.

He overturned the conventional global formula which left one-third of the market price for the farmer, one-third for the processor, and one-third for marketing and distribution. Kurien allowed 80 percent of the market price to go back to the farmer. His motto remained “production by masses, not mass production”. And it worked. A similar development appears to be taking place in power generation as well. Millions of small producers of power could render redundant the conventional structure of power generation, transmission and distribution.

The survey also talks about the cost of land. This is a cost that occurs only when one plans for large scale solar farms. Many believe that some of the large solar farm projects are likely to end up as land-grab exercises in much the same way as many SEZ (special economic zone) projects were a decade ago.

When one opts for rooftop solar the cost of land almost disappears. That is something the the government refused to focus on till around two years ago. And considering that India has over 250 million households, it stands to reason that it has one of the largest number of dwelling units. Logically, therefore, rooftop solar is a strategic advantage that India enjoys in abundance. Moreover, since transmission lines from the source of energy to the consumption point are the shortest, transmission losses also disappear.

In fact, even though Germany has fewer houses, even this country understood the enormous advantage rooftop solar offered. And do bear in mind that this was done more than 15 years ago. The government (and the survey) also forgot that rooftop solar has resulted in this sector providing more employment in Germany than even the automobile sector. Clearly, for a country that needs jobs, that needs to harness the energies of the masses and also decentralise power generation and consumption, the economic survey has only looked at projects that make use of land, and not at rooftop solar.

When it comes to subsidies, the Survey rightly points out that most of the subsidies relate to wind power, not solar power (see chart). In fact, subsidies for solar have climbed down to almost zero. If one goes through one of the finest talks on the disruption that will take place on the energy front, it becomes evident that unsubsidised solar power for residences with 100 hour standby is now possible at 7 cents a kWh for long term (15-20 years) contracts. Unfortunately, the survey appears to have ignored all this. When computing social costs, it has clubbed the subsidies for wind with solar and has come up with a distorted picture about renewables accounting for higher social costs than coal.

There are other issues that the Survey has overlooked. One of them is the inevitable clash between the old structure of generation, transmission and distribution. But that is something that will be dealt with later.