A CellCube FB 30-130 storage system from Gildemeister energy solutions has been installed at the University of New South Wales (UNSW). The company’s storage solutions are based on vanadium redox flow technology that was developed at this same university in Sydney in the 80s.

The CellCube, which has an output of 30 kW and a capacity of 130 kWh, has been in operation at UNSW since June. In addition to research purposes, the system is used to store surplus electricity from a 150-kW photovoltaic system if it cannot be used immediately. Researchers at UNSW are looking to evaluate different performance management algorithms. The purpose is to test the viability of the storage system to support solar power systems on the Australian power grid. In addition, the CellCube will be used as part of the power requirement system of the Tyree Energy Technology building and as an emergency solution.

According to Gildemeister energy solutions, it was only possible to move the storage system into the cellar of the Tyree building after disassembling it. The system was then reassembled there. According to the manufacturer, this is the first time this method has been used with this system.

The building, which was completed in 2012, received an award from the Australian Green Building Council for its efficient design. The use of an energy storage system will further optimize the building concept. A large number of energy-related research units of UNSW are located there, including the Australian Energy Research Institute. The integration of the CellCube was also made possible by AGL Energy and First Solar, which passed funding from the Australian Solar Flagship Programme through to the University of Queensland and UNSW.

In 1985, the Vanadium Redox battery was invented at the University of New South Wales (UNSW, Australia). Today, according to a study by Lux Research, already 75 MWh of Vanadium Redox Flow batteries are deployed.

One of these energy storage installations is GILDEMEISTER energy solutions’ (Wuerzburg, Germany) CellCube at the UNSW. It has a power output of 30 kW and a storage capacity of 130 kWh and was put into operation in June 2015. It is able to store surplus energy from a 150 kWp photovoltaic system. Additionally, it is used for research, Gildemeister reports.

The installation of the CellCube in the basement of the Tyree Building was reportedly difficult, as the storage system had to be dismantled and reassembled in a narrow space. The successful handling of the project confirms the choice for the CellCube, the supplier emphasizes.
The application of the CellCube also goes in line with the green concept of the Tyree Energy Technologies Building which has been awarded a 6 Star Green Star Design by the Green Building Council of Australia. The building, which was completed in 2012, is the new home of most of the UNSW energy-related research activities including the Australian Energy Research Institute.

Support by AGL Energy and First Solar
The integration of the Vanadium-Redox-Flow storage system was made possible by the investment of AGL Energy and First Solar which got a government grant under the Solar Flagship Program in 2012.
GILDEMEISTER energy solutions is very proud to provide a CellCube for the inventors of the Vanadium-Redox-Flow battery and to be part of the further research at the UNSW, reads the press release. 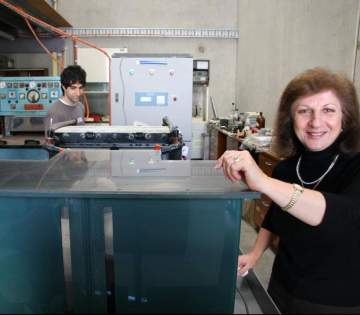 Dr. Maria Skyllas-Kazacos is a chemical engineer whose invention of the Vanadium Redox Battery (VRB) in the late 1980s may revolutionize how we store energy. The VRB is a unique type of flow battery that can repeatedly absorb and release huge amounts of electricity, making them possibly the best partner for renewable energy.

Over the last twenty years, Dr. Skyllas-Kazacos has been improving the technology and finding commercial applications in various markets to reduce the cost and make the VRB a feasible solution to our energy storage challenges. Dr. Skyllas-Kazacos’ VRB technology can already be found in action in Japan, USA, Europe, and Australia for storing wind and solar energy and balancing peak electricity demand. Dr. Skyllas-Kazacos recently joined the Advisory Board for Apella Resources Inc. to help grow their presence in the vanadium markets.

She is Professor Emeritus for the University of New South Wales in Australia where she received her PhD in 1978. As a distinguished academic, Dr. Skyllas-Kazacos has won numerous awards for her research including the R.K. Murphy Medal from the Royal Australian Chemical Institute in 2000 and the Order of Australia in 1999.