Eventually, your phone charger is going to die. 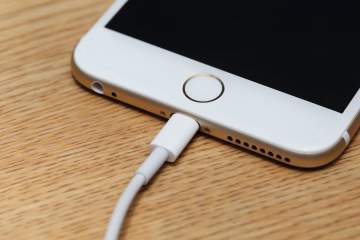 Month after month of getting pushed and pulled into and out of its port will degrade the protective film that coats the connector. And then, usually when you need it the most, your charger kicks it, your phone soon follows, and life as you know it comes undone. As least for a while.

This inevitable breakdown happens of course to everything, from industrial systems to vehicles to nanoelectronics. Friction causes parts to drag against each other, which wastes energy and wears out materials.

In fact, these losses due to friction are estimated to cost developed countries 0.5 to 7 percent of their annual GDP. A report from the Department of Energy’s Advanced Research Projects Agency-Energy (ARPA-E) states that better tribological practices could save one quadrillion BTUs annually, or the equivalent of about 1 percent of the United States’ yearly energy consumption. (Tribology is the study and application of the principles of friction, lubrication, and wear.)

One such practice is creating stronger, more wear-resistant protective films. In an interdisciplinary collaboration, Lehigh University researchers Dr. Nicholas Strandwitz and Dr. Brandon Krick who are on the faculty of Lehigh’s P.C. Rossin College of Engineering and Applied Science and affiliated with the university’s Institute for Functional Materials and Devices (I-FMD), believe they’ve discovered the hardest, thinnest, most wear-resistant coatings yet—plasma-enhanced atomic layer deposited titanium and vanadium nitrides.

In August 2018, the National Science Foundation (NSF) granted Strandwitz, an assistant professor of materials science and engineering, and Krick, an assistant professor of mechanical engineering and mechanics, a Grant Opportunities for Academic Liaison with Industry (GOALI) award to work with an industry partner to study what exactly makes these nitride films so good.

A GOALI award supports shared research interests between academic and industrial partners. It’s meant to further knowledge that could lead to breakthroughs in critical industrial needs. The award lasts three years, and totals over $500,000. Funding for the nitrides project began January 1, 2019.

Titanium and vanadium nitride films are already known to be extremely hard and wear resistant. Traditionally, they’re grown by sputtering, pulsed laser deposition, or chemical vapor deposition methods. In a first, the group’s collaborators at Veeco/CNT grew their nitride films using plasma-enhanced atomic layer deposition, or PE-ALD. Veeco/CNT is a leading supplier of ALD systems based in Waltham, Massachusetts.

“In atomic layer deposition, you’re building one layer of atoms at a time,” says Strandwitz. “It’s a technique that’s already used in microelectronics, like on those in your phone, where you might need a film that is exactly three nanometers thick. If the film is four, or two, nanometers thick, your transistor switch won’t work. And you have a few billion transistors in your phone.”

The technique involves a vapor process that uses two or more self-limiting chemical reactions to grow one layer of film at a time. In this case, a titanium precursor enters the system’s chamber as a gas, reacts with the substrate, and forms a monolayer. Excess titanium gets sucked out, then the second gas, nitrogen plasma, gets pumped in. It bonds with the titanium, and forms a second monolayer. This two-step process is repeated until the film reaches the desired thickness.

The technique is enhanced by a plasma generator, hence the PE in the PE-ALD. 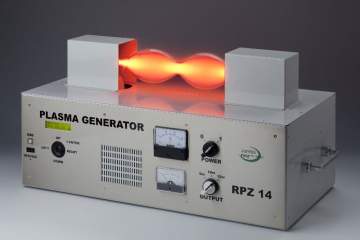 “For growing nitrides, you need a lot of thermal energy, like 800 degrees Celsius,” says Strandwitz. “Or, you need a plasma to make the nitrogen more reactive. Generating plasma means we’re knocking electrons off the nitrogen molecules as they’re flying around in the gas, making the nitrogen more reactive so it will bond to the surface and become part of the film. If you just float nitrogen gas through there, nothing would happen because the N2 molecule is super stable. So with plasma, we can grow these films at 50 degrees Celsius, just slightly above room temperature.”

The ability to grow films at that temperature is key. Too-high temps can melt sensitive materials like plastic and aluminum and make even fairly stable metals more brittle, says Strandwitz.

“Having the capability to deposit at low temperatures opens up more materials that you can deposit on,” he says.

PE-ALD is also notable for its conformality and precision. Unlike with line-of-sight deposition techniques that can leave holes or shadows, the gases used in PE-ALD ensure the entire surface of a substrate is covered, no matter its shape or the complexity of its features. And the self-limiting reactions ensure that coverage takes place a single layer of molecules at a time—no more, no less.

When Krick performed preliminary testing of the hardness and wear properties of the titanium and vanadium nitride films grown using PE-ALD, he was impressed by the results.

“These films are approaching the wear resistance of diamonds,” says Krick. “They’re 100 times better than the commercial nitride coatings. For example, if you’re trying to wear 10 nanometers, it would take 50 cycles of sliding back and forth to wear that much into the commercial coating. It would take 5,000 with this material. Everything is cycle dependent, how long something lasts depends on how many of these duty cycles it goes through. So think about that plug in your phone charger. Something like that could go from wearing out in a year or 18 months, to never wearing out within your lifetime.”

Lowering the barriers to discovery

With the GOALI award, Strandwitz and Krick will work with Veeco/CNT. The multidisciplinary team includes Strandwitz whose expertise includes ALD and thin films, Krick the specialist in tribology, and collaborators Mark Sowa at Veeco/CNT and Alexander Kozen at the United States Naval Research Laboratory, both world renowned scientists in the field of ALD instrumentation and processing. The team also includes a group of talented graduate and Ph.D. Lehigh students, including NSF Fellow Tomas Babuska and Guosong Zeng, a Ph.D. alum from Krick’s lab who is now at the Lawrence Berkeley National Laboratory.

The scientists will grow the films while Strandwitz’s team will examine their microstructure and Krick’s team will measure their mechanical properties. They’ll “turn the knobs” as Strandwitz says, on variables such as temperature, the amount of titanium they use relative to vanadium, and the use of oxygen in the films.

All to determine what makes these films so special.

“If we know why they’re so good, we could design a new material that exploits it even further,” says Strandwitz. “So if we wanted a film that had certain hardness properties or wear properties, if we understand how the system works, we can tune it for that.”

“This technique is useful for anything that has a lot of small, moving parts that need really thin coatings,” says Strandwitz.

That includes a lot of things in a lot of fields: aerospace, medicine, communications, transportation, defense, industry. Pretty much anything that moves. And when all that stuff can move easier and last longer, energy use and material waste decreases, benefiting both the economy and the environment.

“What’s awesome is that we’ve measured a lot of materials in our lab and this is by far the best,” says Krick. “It’s really exciting to dive in deeper and understand why it’s so good, and how it can be used to actually impact these various applications.”

It’s no surprise that such a profound impact requires the melding of disciplines. And it’s possible Strandwitz and Krick would never have gotten this far if they weren’t such good collaborators—and buddies. They were hanging out one day when Strandwitz mentioned a cool material he was researching, and pretty soon, Krick was testing it in his lab.

“I think if each of us worked in a vacuum, no one would have ever measured the mechanical properties of these films,” says Krick. “I would never know about this deposition technique. The materials are there, the guys at Veeco/CNT can make all sorts of materials, but without the interdisciplinary aspect, you would never know what they’re good for. It really lowers the barriers to discovery.”