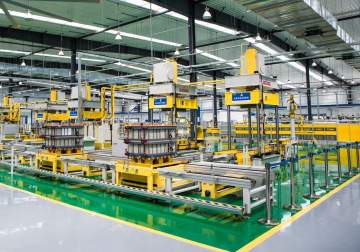 Large-scale batteries in China. Energy storage could be a solution to improve grid stability in China as renewable energy capacities increase. A promising way to store the excess surplus energy for several hours are batteries based on vanadium flow chemicals.

China’s wind capacity has exploded from almost zero in 2006 to 92 GW last year. Since most of the wind farms are located in remote areas many additional transmission lines have to be built to transport their excess energy to locations with higher demand.

But building transmission lines takes time which has led to massive curtailments? when wind farms have to be shut down due to grid overload. In some areas, 20% of the wind energy is wasted this way.

According to the statistics data of the Chinese National Energy Bureau in 2012, the total electricity amount of wind curtailment reached 200 GWh which is the double of 2011. Energy storage could be one of the solutions improve this situation and the Chinese government is supporting R&D and demonstration projects of different storage technologies.

Electrolyte is pumped from storage tanks through reaction stacks, where electrons transfer between different ionic forms of the vanadium by electrochemical reaction.

The complexities and latent dangers of bulk electricity storage in confined spaces have become more evident in recent years with a series of thermal runaway events at multi-MW battery installations. It is precisely in these areas that the inherent control stability, charge uniformity, thermal consistency and flexible form factor of flow batteries is most compelling.

At small scale, flow batteries may appear complex compared with? a few lead-acid cells in series? However, when extended life and significant scale is required, all batteries require an array of components to actively manage and maintain performance.

In the case of flow batteries, these components are simpler, cheaper, more reliable, and easier to control. Consequently, a sophisticated flow-battery system design can yield a significantly more compelling product than is possible with conventional static battery technologies at MW-scale.

Various redox couples have been developed for flow batteries but only Vanadium based flow batteries have reached mature level allowing commercial applications in the megawatt range.

The reason for that is that Vanadium Flow batteries (VFB) use the same element Vanadium for both the positive and negative electrolyte mitigating cross-contamination.

This leads to an excellent reversibility and hence a basically unlimited cycle life – up to 270,000 deep cycles that have been demonstrated. Other advantages comprise the possibility of decoupling power (kW) and energy (kWh) in the battery design, aqueous, fire extinguishing electrolytes and room temperature operation preventing thermal run-away risk of conventional batteries and highly competitive in Levelized Cost of Energy (LCOE).

Click on the above icon for the FULL PDF version