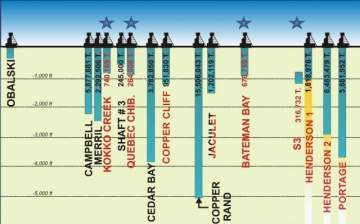 VanadiumCorp is confident that the Chibougamau camp holds exceptional opportunities for world-class mineral discoveries. Deep exploration in the Chibougamau district is relatively un-applied when compared to the renowned Sudbury, Timmins, Kirkland Lake, Noranda, Bousquet, and Cadillac districts where significant deeper extensions to resources have been made in recent decades, compels VanadiumCorp’s team to feel the Chibougamau camp provides an even further advantage. Field-testing of VanadiumCorp’s theories and model for the region is complete and the company is confident in proceeding with plans to partner these projects for the economic benefit of the region as it has with Dore Copper in recent years.

The primary targets for VanadiumCorp’s exploration at Chibougamau is near-surface significant mineralization and indicators of potential mineralization at depth. The latest techniques and technologies will be utilized throughout the programs. A recent marked increase in exploration activity in the Chibougamau region is confirmation that VanadiumCorp is not alone in identifying the merits of this exciting, historical copper-gold mining district. All Projects are accessible off of Highway 167 near Lac Chibougamau.

This project is currently optioned to Dore Copper Mining Corp. 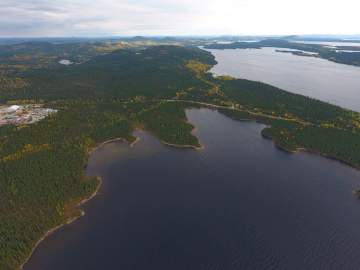 Surrounds the Dore Cornerbay (former producing) mine. Located at the south end o Chibougamau Lake, the key CornerBack claim package surrounds the mine formerly run by the Campbell Resources as a producing mine. The project was entirely covered by the 2006 GSC-sponsored MEGATEM survey, which clearly indicated anomalies related to the Corner Bay mineralization. Deeper search geophysics and drilling are required to determine any continuation of the Corner Bay mineralization onto the CornerBack Project. For more information see www.dorecopper.com

This project is currently optioned to Dore Copper Mining Corp.

The following is an excerpt from Dore Copper Mining Corp 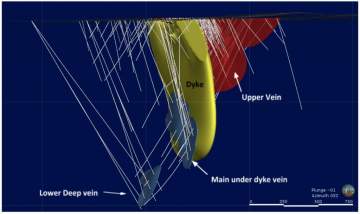 The main Corner Bay vein is a north/south striking, dipping 75 degrees to the west vein, hosted within a strike/slip shear zone.  The Corner Bay deposit is considered to be the first economically significant copper discovery on the south flank of the Lac Doré complex. Twenty-six years of exploration, mainly by Corner Bay Exploration Ltd., resulted in the discovery of the Corner Bay deposit in 1982 by a joint venture between Corner Bay Exploration Ltd. and Rio Algom Inc. In 1995, the property was acquired by MSV Resources Inc. (MSV) who subsequently merged with Campbell Resources that carried out several exploration drilling programs up to 2008.

An initial Mineral Resource estimate was prepared in 2006.  In 2008, an underground bulk sample program was initiated and approximately 40,000 t was collected, trucked, and milled at the Copper Rand concentrator with a copper recovery of 94.04%.

The 2017/2018 drilling program expanded known areas and identified additional resources and new targets. The main vein at Corner Bay was drilled in two locations: 1) at a depth around hole CB-95-02 and, 2) under the dyke at approximately 800 meters depth on the southern side of the main vein’s strike where three good historical high-grade intercepts occurred. Both programs confirmed the continuation of the mineralization with the results from the second area being the standout with all 8 intercepts intersecting economic mineralization.

Chalcopyrite content ranges from 5% where it occurs interstitially between clasts and along veinlets to around 90% as massive sulfides in several discreet zones.

Alteration extends up to 10 m away from the ore zone and comprises sericite and chlorite, the alteration is represented by slight bleaching of the host anorthosite and gradually dissipates away from the shear zone just as the shearing fabric.

Because of the strike/slip movement along the main fault that hosts the mineralization, the open space created by jogs along the structure is vertical in nature, which enabled the formation of ore chutes that are very steeply dipping to sub-vertical. This is currently confirmed by the grade distribution in the upper part of the vein where drilling is most dense.

There is the occurrence of other veins in the Corner Bay District and the focus of the company is to increase the resources at the Main vein but also to define economic parallel structures. 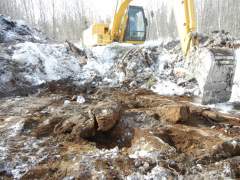 The ICON SULLIVAN copper mine operated from 1968 to 1975, producing 2.1 million tonnes with an average grade of 1.95 % Cu. Following an agreement of February 1967, Merill Island Corporation Ltd. began to mine the deposits and treat the ore at its mill near Chibougamau. The project became known as the Icon Sullivan Joint Venture. The mine produced at a regular rate of some 540 tonnes daily until the installation of a preconcentrator in August 1970. Production increased to about 990 tonnes per day. Three main zones were mined by a combination of the open pit and underground methods. West of the mine, Opemisca Copper

Mines (Quebec) Limited acquired two adjacent properties. The larger one known as the J property lied just to the west of the Apella’s property, and the J-1 property comprising 4 claims, was extending about 600 west of the No 3 Pit. On the J Property, in 1968-1969, Opemisca drilled 19 diamond drill holes totaling 669 m. Drilling suggests that the property is largely underlain by gneisses of the Superior province. No significant mineralization was intersected.

Former producing mine – Located at the south end of Lake Mistisinni, the Icon Project is comprised of a number of strategically assembled claims covering the former producing Icon Copper-Gold mine.