Energy storage gets ready for its close-up

Energy storage technology keeps making strides, even though it’s still unclear just how dramatically it will change the grid.

For the more than 2,000 storage devotees who have descended on the San Diego Convention Center for the Energy Storage North America conference, though, the future is now.

The conference’s expo floor is sold out, with 80 exhibitors and entrepreneurs joining energy executives, government regulators, utility officials, academics and just about anybody else interested in technologies aimed at keeping the grid running smoothly as more renewable sources are added to the power system.

The conference, in its fifth year, runs through Thursday.

Janice Lin, the co-founder of Energy Storage North America, compared energy storage technologies to companies like Uber and Airbnb that have brought big changes to their respective industries.

“Consumers have owned cars for decades, they’ve owned houses for decades,” said Lin, who is also the executive director of the California Energy Storage Alliance. “Now with software tools and smarter planning we’re able to turn these under-utilized assets into a very well-utilized asset with a lot of revenue potential. And storage is enabling that same sort of transition in the power sector.”

At its essence, storage is the capture of energy to be used at a later time.

Think of a battery. In fact, batteries such as the lithium-ion variety from Elon Musk’s Tesla “giga-factory” in Nevada, are often the energy storage technology that draws the most attention.

But there are a number other storage technologies. Pumped hydro storage, for example, dates all the way to the 1890s. 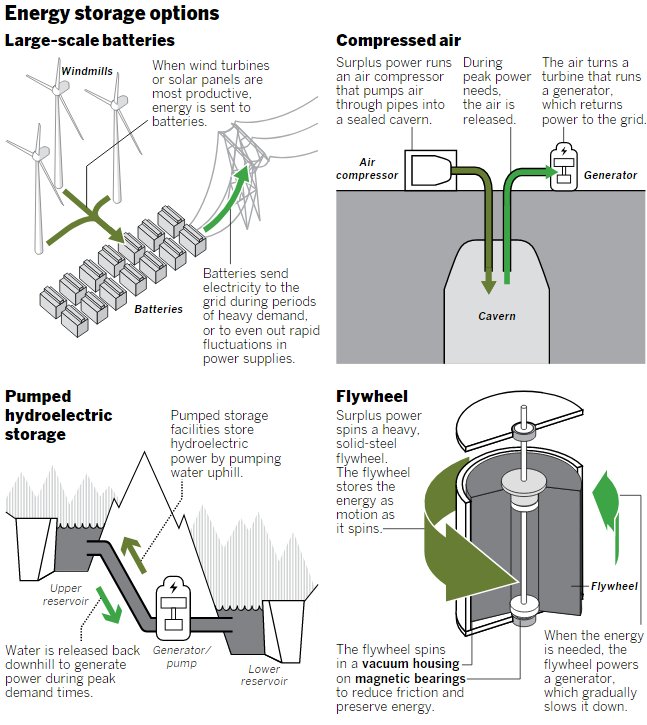 Energy storage has received much more attention in the past few years as policymakers across the country have mandated the use of increasingly more renewable energy sources into their state energy portfolios as ways to reduce greenhouse gas emissions.

California mandates the state derive 50 percent of its electricity from clean-energy sources by 2030 and a bill in the Legislature this session would move the target all the way to 100 percent by 2045.

In order to reach those rates of renewable penetration, the development of energy storage systems is considered crucial.

“Frankly, the grid in the U.S. and globally was not designed to handle all this renewable energy that’s come on,” said Kimberly McGrath, senior director of marketing and business development at Maxwell Technologies, an international company based in San Diego that makes energy storage and power delivery products.

Renewables provide clean energy but they have a problem with intermittency. That is, solar production slows when the sun doesn’t shine and wind lags when the breeze doesn’t blow.

To make up for that, grid managers have to rely on other energy sources while ramping up and down over the course of the day and night to meet sharp changes in electricity net demand.

Stored-up energy can help fill in those gaps.

“What makes batteries attractive is their relative simplicity,” said Morten Lund, a San Diego attorney who specializes in energy issues for the Stoel Rives law firm. “And it gives you (geographic) independence. It’s small, relatively speaking, and you can put it basically anywhere.”

Earlier this year, San Diego Gas & Electric unveiled a 30-megawatt lithium-ion battery energy storage center — the largest of its kind in the world — at the utility’s operations center in Escondido.

Built in partnership with Virginia-based AES Energy Storage, the Escondido site consists of 400,000 batteries, similar to those used in electric cars. The batteries sit in 24 massive containers with the capability of serving about 20,000 SDG&E customers for four hours.

The California Public Utilities Commission (CPUC) has directed the state’s three investor-owned utilities to procure 1,325 megawatts of energy storage by 2020.

SDGE’s target was set at 165 megawatts and the utility announced in April it had signed five new contracts for battery storage facilities, leaving it just 7.5 megawatts shy of meeting its target number with three years to spare.

Pacific Gas & Electric and Southern California Edison were given larger energy storage requirements — 580 megawatts each — but say they are also ahead of schedule.

But how much will those energy storage targets cost?

CPUC rules forbid the disclosure of the contract details for three years but some analysts have estimated the commission’s energy storage directive may cost as much as $3 billion, which will be picked up by utility ratepayers.

Storage costs are higher than the prices for conventional energy sources but the industry’s advocates point out the price tag gets lower each year and predict it will continue to come down as the technology gets refined.

Ackerman is the executive director of the Western Power Trading Forum, an organization based in Sacramento whose 90 members in the West buy and sell power.

“The battery advocates are all enthusiastic … that those prices are going to drop,” Ackerman said. “But they’re not taking the risk. They’re hoping the state will mandate the use of battery storage, shoving it over to the utility bill you’ll be paying every month whether you like it or not. I have a problem with that.”

The energy storage industry is growing fast, though.

Stephen Brick, senior adviser to the Boston-based Clean Air Task Force, has studied the cost of energy storage technologies, including batteries. He’s skeptical of some of the industry’s rosier scenarios.

“The numbers are suggesting to us that the applications (for battery storage) are going to be rather more limited,” Brick said.

“Because the implications of power interruptions are so costly for a data centers, it’s perfectly reasonable for a data center’s owners to say we don’t care what the cost of a battery is, that extra reliability we buy with a very expensive battery is worth it,” Brick said.

While the management consulting firm McKinsey & Company said in a June report that “full grid defection — that is, completely disconnecting from the centralized electric-power system — is not economical today,” it reported that battery-pack costs have dropped from almost $1,000 per kilowatt-hour in 2010 to less than $230 per kilowatt-hour in 2016.

Energy storage is also taking on an international dimension.

At the ESNA conference this week, delegations from Mexico, Australia and China will take part in discussions about grid transformation.

“These conversations will not be an Energy Storage 101, they’re far more advanced,” Lin said. “There’s a level of understanding about the different types of storage, the kinds of services it can provide and now the dialogue is really about how we can work together and what are the specific market and policy mechanisms to go faster.”

Ultra-capacitors can “take the heavy lifting off the battery in terms of power,” McGrath said, preserving the battery’s lifetime, which lowers costs. “We’re at a huge tipping point in the industry of energy storage in general and ultra-capacitors are finding their place as a key technology.”

At the same time, though, integrating large amounts of energy storage to help absorb the increasing number of renewable sources on the grid remains a challenge.

“Right now we’re still operating within a large framework of rules and policies (that were) not created to stifle storage but were built at a time when you had a coal plant and a dam, then you had a bunch of light bulbs at the other end,” Lund said. “So the structures really haven’t been there to allow storage … But technologically, it’s already here.”