By Adam Joseph for Townsville Bulletin 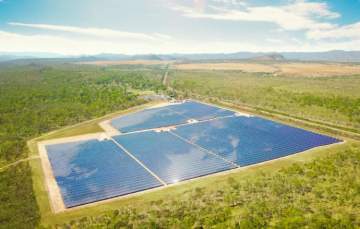 TOWNSVILLE for the Powering North Queensland Summit, state shadow minister for energy Michael Hart indicated the LNP would support a floating solar farm to power the Houghton pipeline pumps, which at present cost the council and ratepayers $25,000 a day.

This is a “market led proposal” to which Opposition Leader Tim Nicholls referred in May this year.

The benefits of solar farming on dams are well known in places like India, China, the UK and Japan.

They generate more than 19 per cent more power than land-based equivalents because solar panels are kept cool by the shaded water below.

By shading water, they also reduce evaporation (according to the CSIRO, Burdekin Falls dam loses 1.9m each year through evaporation).

It’s a sensible use of taxpayer funds to secure both energy and water security with a single infrastructure spend, and even more so if it creates local manufacturing industries. Instead of installing a floating solar farm just to power pumps, Townsville could install a 40MW floating solar farm and store this electricity in a 200MW/ h vanadium redox battery (VRB). This would allow the operator (most likely the government-owned Ergon, or “CleanCo” announced by Premier Annastacia Palaszczuk) to put downward pressure on electricity prices.

That can be achieved by using the battery to download cheap “off peak” (coal-fired) power at night, combine it with renewable energy and deliver it back into the grid at “top of demand”.

While US car maker Tesla is driving PR around lithium ion batteries, China, Japan, the UK, India and many other countries already use VRBs to store dispatchable power.

And like floating solar, it is an Australian invention yet to be commercialised in this country. The breakthrough was made in 1986 by Professor Maria Skyllas-Kazacos AM after NASA tried and failed.

Whereas lithium is the lightest known mineral, ideal for portable objects like cars, laptops, watches and phones, it is a rare earth mineral which is in finite supply. If it is wasted on stationary objects like large MW storage infrastructure, on current projections it will run out in 17 years.

In July, the State Department of Energy and Water Supply (DEWS) visited UNSW to learn about VRBs as it plans the Government’s upcoming “reverse auction” for battery storage. Since then, UNSW, James Cook University, Australian Vanadium Ltd and HydroSun published a paper to outline the economic, social and environmental benefits of vanadium flow batteries over lithium ion.

As the Queensland election approaches, all political parties will be considering how their policies on energy and water security can maximise employment benefits to places like Townsville. Both the Coalition and Labor have backed the need for battery storage, yet One Nation supports local battery manufacturing rather than losing the value chain by “digging and shipping minerals” to other manufacturing countries. And Katter’s Australian Party supports “multi-use water infrastructure”.

What can this mean for the significant number of FIFO workers who live in Townsville, the former workers at Clive Palmer’s nickel operation or those enjoying sporadic work at places like the Iplex factory (mothballed during this term of government)?

Auspac Energy, associated with the 800MW/h vanadium redox battery currently being built in China, calculates that a 200MW/h battery in Townsville would support 600 factory jobs and additional jobs in the local community. And these figures do not even include the jobs to be created in manufacturing flotation devices using HDDP poly pipe, at present manufactured in Australia.