Why Batteries Are the Key to Biden’s Green Dreams 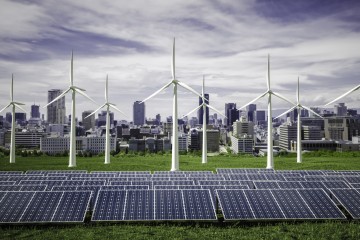 President-elect Joe Biden’s plan to fight global warming calls for building vast swaths of solar panels and wind turbines, but making it work will rest squarely on batteries. That’s true of climate change plans in Europe, China and elsewhere, too, because there’s no way to switch to carbon-free cars and power grids without greatly expanded storage capacity for electricity. Even though battery prices have plummeted over the last decade while production has soared, the hard part lies ahead.

1. Why are batteries so important?

Slashing greenhouse gases will require electrifying many things that now run on fossil fuels and generating that electricity with renewable power. But unlike traditional power plants that burn coal or natural gas, most renewable power sources can’t supply electricity all the time. Wind farms are useless on calm days, and solar panels produce nothing at night. Hence the need to store their energy.

He wants a green electric grid by 2035, with batteries backing up solar plants, wind farms and other carbon-free power sources. He wants cars running on electricity too, and wants their batteries built in the U.S. rather than imported from China. He would also pump money into researching new chemistries and large-scale energy storage technologies, with a goal of cutting costs 90% below today’s lithium-ion batteries.

China rules the battery business, producing 79% of the world’s supply, according to BloombergNEF. That’s no accident — the Chinese government years ago put batteries on the list of high-tech industries it wanted to dominate with its “Made in China 2025” initiative, funnelling subsidies to domestic suppliers. The U.S. ranks a distant second, with 7% of global production. More domestic plants, however, are planned for Georgia, New York, North Carolina and Ohio. One limiting factor, however, has been U.S. access to the minerals needed, lithium, in particular, most of which now comes from South America, Australia and China.

4. What can be done about that?

Three companies plan to extract lithium from underground brine in the Southern California desert, and state officials who have branded the area “Lithium Valley” want to lure battery manufacturers as well. Other deposits lie beneath Arkansas and Nevada. 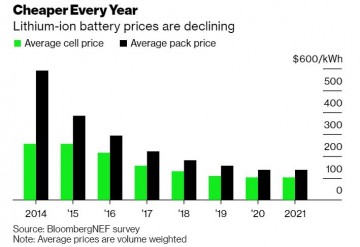 5. What impact will all that have?

Soaring worldwide production of batteries in the last decade slashed costs, with the average price of a battery pack tumbling more than 88% from 2010 to 2020, according to BNEF. They’re still falling, although not as quickly. BNEF estimates they’ll drop below $100 per kilowatt-hour in 2024, a long-awaited milestone. At that price, electric cars should cost about as much up front as their gas-burning brethren, prompting more drivers to switch. Battery prices will continue sliding from there, with BNEF projecting $58 per kilowatt-hour in 2030 and $44 in 2035. That does not, however, represent the kind of dramatic reduction Biden seeks.

6. How are batteries used for green power?

They’re not just in cars: Utilities across the U.S. have started plugging big batteries into the electric grid, both to back up the variable output of solar and wind farms and replace small “peaker” power plants that only run when electricity demand surges. California has been particularly aggressive, installing enough new grid-scale batteries in 2020 to supply 572 megawatts of electricity or 2,213 megawatt-hours. That’s enough to power roughly 430,000 homes for almost four hours.

The transition hasn’t been smooth. The state last summer suffered its first rolling blackouts in 20 years, as a heatwave strained supplies. Part of the problem: older gas-burning plants have been closing faster than batteries have replaced them. Although more batteries will come online by next summer, their capacity remains limited, typically supplying electricity for no more than four hours at a time. That’s enough to last through the early evening, after solar plants shut down, but may not be sufficient if night-time temperatures stay high during extreme heatwaves. Come summer, California will face more scrutiny as a test case for the kind of grid Biden wants to build.

A push for new technologies. That’s not an easy goal: Lithium-ion batteries now power everything from smartphones to the grid, and so many plants to manufacture them are under construction worldwide that any radically different battery technology could have a hard time breaking into the market. That doesn’t mean innovation is dead. Many companies are pursuing their own tweaks, often different chemical recipes for the anode or cathode, and some of them could boost output and/or cut costs by significant amounts. Tesla Inc., for example, 2020 announced a series of changes to cell chemistry, design and manufacturing processes that the company claims will cut battery pack costs by 56%. And multiple companies are exploring solid-state batteries, that replace liquid electrolytes with solid ones. But more will likely be needed.

Even the biggest lithium-ion batteries don’t provide the scale of energy storage that society will ultimately need to ditch fossil fuels. That will require storage technologies that can supply energy not just for four hours at a stretch but for days or weeks. Pumped-hydro plants, which use water and gravity to store and release energy, are a time-tested solution, but they take years to build and require the right terrain. Hydrogen has emerged as another potential answer. Solar and wind facilities could power electrolyzers to split hydrogen from water, and that hydrogen could be stored until needed, to be burned in turbines or generating electricity or fed through fuel cells. Other possibilities include storing compressed air in underground formations or in above-ground tanks, releasing it through a turbine when needed. And one company, Energy Vault, has even proposed using towers of concrete blocks that could be raised by the electric motor when electricity is cheap and abundant. When electricity is needed, they’d be lowered down, using the force of their descent to the motor in reverse to generate electricity.

Content in the public domain and is for general information purposes only, with no representation, guarantees of completeness, warranty of any kind, express or implied regarding the accuracy, adequacy, validity, availability, completeness, usefulness or timeliness of any information contained within. Please also excuse any syntax as authors and reposted articles are sourced from global origins. UNDER NO CIRCUMSTANCE SHALL WE HAVE LIABILITY TO YOU FOR ANY LOSS OR DAMAGE OF ANY KIND INCURRED AS A RESULT OF THE USE OF THIS REPOSTED ARTICLE. THE USE OF THIS ARTICLE AND YOUR RELIANCE ON ANY INFORMATION CONTAINED HEREIN IS SOLELY AT YOUR OWN RISK. VANADIUMCORP ALSO ASSUMES NO RESPONSIBILITY OR LIABILITY FOR ANY ERRORS OR OMISSIONS IN THE CONTENT OF THIS ARTICLE.