Adriaan Bakker, CEO of VanadiumCorp comments, “Vanadium defies Wiedemann-Franz Law. The law states that good conductors of electricity are also good conductors of heat. That is not the case for metallic vanadium dioxide. This unusual ability can be used to dissipate the heat in engines, computers, robotics, energy storage, and more. Smart windows and energy storage are examples of the glaring need to address the global short supply of vanadium only possible with more efficient and sustainable methods of production.”

Last year, researchers at DOE and Berkley in the US discovered that the thermal conductivity attributed to vanadium electrons is ten times smaller than what would be expected from the Wiedemann-Franz Law.  Vanadium dioxide acts as an insulator, helping to keep the indoor heat from escaping through the window glass and still allows the full spectrum of sunlight to enter from the outside. At higher surface temperatures, however, it transforms into a metal that blocks heat-causing infrared solar radiation from entering.

The following research is described in a paper that was recently published in the journal Scientific Reports – Nature.

Unlike previous “smart glass” windows that require electricity to operate, scientists from Australia’s Royal Melbourne Institute of Technology University have developed a coating that allows the existing glass to become smart without electricity. Previously, in order to apply vanadium dioxide coatings, specialized layers – or platforms – had to be created on the surface. The RMIT team, however, has developed a method of applying the coatings directly to surfaces such as window glass, without the need for platforms. It is now hoped that the system can be commercialized as soon as possible. 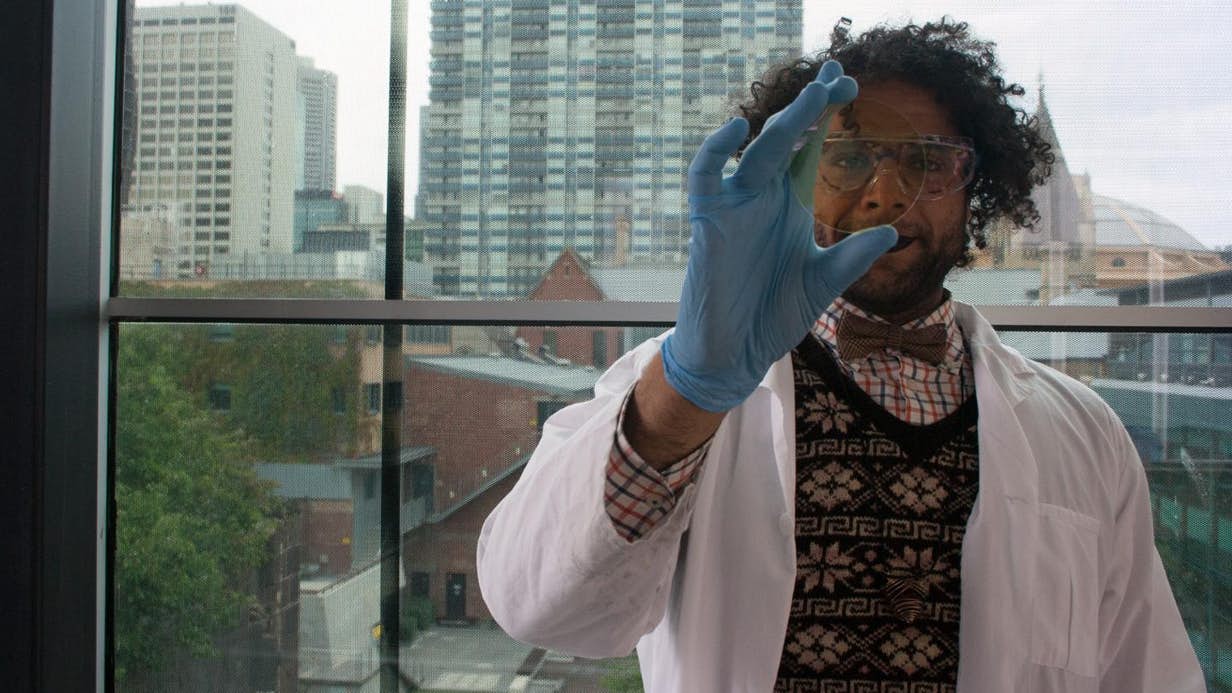 According to Madhu Bhaskaran, a leading scientist at the RMIT, the breakthrough could help meet future energy needs and create temperature-responsive buildings. “We are making it possible to manufacture smart windows that block heat during summer and retain heat inside when the weather cools,” she said. “Our technology will potentially cut the rising costs of air-conditioning and heating, as well as dramatically reduce the carbon footprint of buildings of all sizes.”“Solutions to our energy crisis do not come only from using renewables; smarter technology that eliminates energy waste is absolutely vital.” says Bhaskaran. Composed of relatively inexpensive vanadium dioxide, the self-regulating coating is just 50-150 nanometers thick which is approximately 1,000 times thinner than a human hair.

Self-cleaning: The window is ultra-resistant to water, so rain hitting the outside forms spherical droplets that roll easily over the surface – picking up dirt, dust and other contaminants and carrying them away. This is due to the pencil-like, conical design of nanostructures engraved onto the glass, trapping air and ensuring only a tiny amount of water comes into contact with the surface. This is different from normal glass, where raindrops cling to the surface, slide down more slowly and leave marks behind.

Energy-saving: The glass is coated with a very thin (5-10nm) film of vanadium dioxide which during cold periods stops thermal radiation escaping and so prevents heat loss; during hot periods it prevents infrared radiation from the sun entering the building. Vanadium dioxide is a cheap and abundant material, combining with the thinness of the coating to offer real cost and sustainability advantages over silver/gold-based and other coatings used by current energy-saving windows.

Anti-glare: The design of the nanostructures also gives the windows the same anti-reflective properties found in the eyes of moths and other creatures that have evolved to hide from predators. It cuts the amount of light reflected internally in a room to less than 5 percent – compared with the 20-30 percent achieved by other prototype vanadium dioxide coated, energy-saving windows – with this reduction in ‘glare’ providing a big boost to occupant comfort. Vanadium dioxide-coated “smart windows” are also being developed by scientists around the world from:

On behalf of the board of VanadiumCorp:
Adriaan Bakker, President and Chief Executive Officer