The article from Australian Financial Review is below:

As investment in energy storage continues to grow around the world, Australia’s chief scientist Dr. Alan Finkel says a lesser-known technology has the potential to play a significant role in the energy storage market, with Australian companies well-positioned to lead the charge. While lithium-ion technology has gained a high-profile in the investor community for use in mobile energy storage applications such as electric cars and smartphones, Dr. Finkel said flow batteries, which use an alternative process and materials, were gaining traction and presented an opportunity for Australian providers. “Flow batteries are potentially going to be a big contributor in the stationary energy storage, like the grid-level stationary energy storage,” Dr. Finkel, told The Australian Financial Review on the sidelines of the APPEA conference in Brisbane last week.

Flow batteries work with the use of a liquid electrolyte stored in two separate tanks on either side of a membrane. The liquid “flows” through the two separate networks past the membrane, driving the chemical process that generates electricity.

Dr. Finkel said while flow batteries would work in electric vehicles or electronics, it would be particularly competitive in larger-scale applications.

“If you want to get bigger hours of storage, you basically just have to put in bigger tanks,” he said. “Whereas to get more hours for a [lithium ion] battery you have to put in more and more batteries. [In flow batteries] bigger tanks are actually the cheapest part of it.”

In November last year, Bloomberg New Energy Finance forecast the global energy storage market was expected to attract investment of $US620 billion ($894 billion) in the years to 2040.

With the Indo-Pacific region expected to account for a significant portion of that investment, the opportunity for Australia is considerable.

The ability to expand flow battery capacity by increasing volume of the electrolyte makes it suitable to energy storage applications such as storing solar or wind power generated during the day.

Other attributes are also driving adoption, such as the fact liquid in flow batteries has an indefinite life, so degradation over time is reduced. This means they are expected to last up to 25 years, considerably longer than lithium-ion alternatives Dr. Finkel said. They also present a lower environmental and operational risk as they do not result in the same recycling issues as lithium-ion batteries and are not prone to overheating. 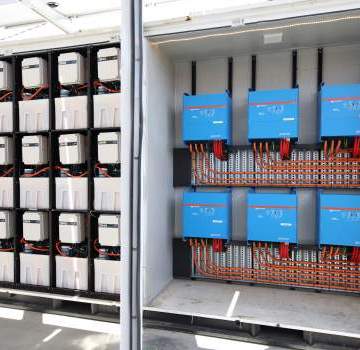 Dr. Finkel’s words will provide encouragement for those looking to advancement in energy technology to create profitable industry and future job growth in Australia.

Local companies responding to the opportunity include Redflow, which is a flow battery manufacturer.

Junior miners Australian Vanadium and Multicom Resources are also in the mix. Vanadium is a key input to flow batteries and both miners produce the metal. They plan to leverage that production to support battery storage subsidiaries.

Two recent projects demonstrate the growing interest in the use of flow batteries for grid-scale energy storage.

The system will be twice the size of Tesla’s lithium-ion system installed in Jamestown for the South Australian government in 2017.

In China the world’s largest battery storage system is being developed. The project will be more than six times larger than the Jamestown Tesla battery.

Early bird gets the worm

The opportunities for Australian business in this area have led the recently established Future Battery Industries Cooperative Research Centre (FBCRC) focusing resources on developing a domestic industry for flow batteries.

Queensland University of Technology’s (QUT) Professor Peter Talbot, program manager at the FBCRC and one of Australia’s leading experts in battery technology, said attention on lithium-ion batteries had allowed the flow battery industry to quietly building in the background.

Last month Australian flow-battery manufacturer Redflow announced it would supply one of its systems into a smart-grid pilot program in Qinghai province. The installation will be relatively small but is among one of the first Australian companies

Not a one-trick pony

In addition to grid-scale applications, the use of flow batteries in other stationary energy storage areas has seen Australian companies devote their attention to the opportunity.

Batteries to support isolated infrastructure that require off-grid, power supply, such as in remote telecommunications towers, is an area where Redflow’s batteries are already in use.

Multicom Resources, one of the commercial partners in the FBCRC, is looking to the residential energy storage market.

It has established Freedom Energy, which is developing a flow battery to compete with lithium-ion offerings in residential energy storage, such as Tesla’s Powerwall.

Multicom Resources executive director Nathan Cammerman said with a battery life that lasts about three times longer than its lithium-ion peers, the higher capital cost of a flow battery system can be offset.

VanadiumCorp Resource Inc. is an integrated technology and mining Company focused on developing the exclusive supply chain for vanadium based energy storage and emerging technologies that utilize vanadium. VanadiumCorp is focused on commercializing the most efficient and sustainable recovery method to produce vanadium with jointly developed process technology. VanadiumCorp also holds a significant vanadium-titanium-iron bearing resource base in mining friendly Quebec, Canada including the 100% owned Lac Dore Project adjacent to Blackrock Metals Inc. and the 100% owned Iron-T Project near the Glencore Matagami (Zinc-Copper) Mine.

Vanadium Redox Flow Batteries (VRFB, VRB) are containerized, long duration, non-flammable, compact, reusable over infinite cycles and last more than 20 years. Most batteries use two chemicals that change valence (or charge or redox state) and cross contaminate and thus degrade over time. VRBs utilize multiple valence states of vanadium as a single element to store and release charge. VRBs consists of two tanks of vanadium electrolyte that flow adjacent to each other past a membrane and generate a charge by moving electrons back and forth during charging and discharging. This battery offers unlimited energy capacity simply by using larger electrolyte storage tanks. It can be left completely charged for long periods without losing power and maintenance is much simpler than other batteries. The unique advantage to separate power and energy also provides significant advantages over competing technologies. With sustainably produced VanadiumCorp ElectrolyteTM, the carbon footprint of the VRB is remarkably low.

On behalf of the board of VanadiumCorp:
Adriaan Bakker
President and Chief Executive Officer